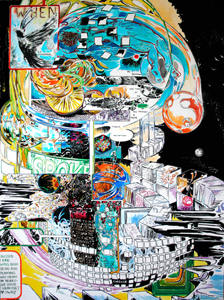 Above: James Pustorino, "Universechild 9: sometimes you know you are dreaming and you try to change the dream into something," 2003-2011, pencil, liquid acrylic, ink, colored pencil on paper, 36 x 48"

In the installation "Universechild," James Pustorino sets an archetypal coming-of-age saga in the reaches of outer space. Drawing inspiration from comic books and graphic novels, the artist weaves his narrative in a storyboard-like progression of images in pencil, acrylic paint, and metallic liquid pen on paper. The rectangular panels begin with a blank picture plane as the exhibition commences, the tabula rasa taking shape via wall-painted conduits to increasingly dense picture planes as the story unfurls.

Our hero is a young man who happens upon a sinister alien energy form, which Pustorino cosmologically terms a "creation entity." This extraterrestrial possesses unfathomable powers and engages the man in an effort to effect within him a kind of trans-humanist evolution. There are complications, however, involving the hero's mother and other chastening trials that hold the key to his self-actualization. The narrative's presentation is visually sophisticated, well-composed, and immersive, taking the viewer into faraway worlds of vivid color and expressive storytelling.