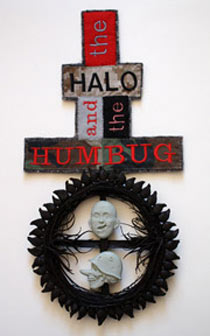 Look past the seeming callowness of Jacobine van der Meer's sculpture and you will find a brilliant commentary on the absurdity of war.  The small disfigured faces that make up the obverses of three of the five urethane resin medals, "Players," come from Ernst Friedrich's "War against War"(1924), a lurid and graphic photographic account of the deformation wrought on soldiers by WW I ballistics. The other two obverses are "skull" medals, ironic profiles of helmet-wearing bony heads with large phalluses for noses, which van der Meer derived from actual German WW I medals. She is inspired by the banality of evil that is American cultural militarism, in particular, and most powerfully, Wadi Al Sahara, the simulacrum of an Iraqi city outside of Joshua Tree where would-be soldiers practice war games before heading overseas.