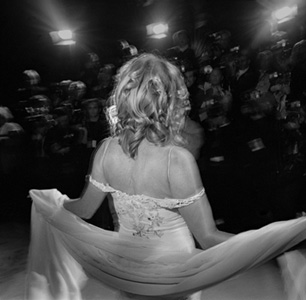 Larry Fink's collection of silver gelatin and archival pigment print photographs titled "The Vanities" investigates the private moments of public personas of the film and fashion world. They project nether worldly beauty, decadence, and by implication lead a life that walks the tightrope of fantasy on earth.  In Fink's lucid photographs, women don elegant silk ball gowns, sip champagne in large flutes, and clutch Academy Awards in the crook of their elbows like playthings. "The Vanities" series is an assemblage of Vanity Fair Oscar Parties where young and old Hollywood collides, as seen when Meryl Streep whispers into the ear of Natalie Portman. The young actress closes her eyes as if to concentrate on each word of this exchange.

Fink's ability to candidly capture the humanity behind celebrity is what sets him apart. "Oscar Party, March 2000" captures the moment when the party has begun to wind down and a couple embraces beside a young woman who is fast asleep on a straw chair. "Oscar Party, LA, March 2002" is shot from behind an actress who opens her arms to the mob of paparazzi, allowing us to assume her point of view. But this show moves beyond the glitter; Fink also focuses on the lives of modest individuals who will never know the glare of the spotlight. "Social Graces" follows a lower middle class family in a rural suburb that celebrates birthdays with homemade cakes, and toasts a recent graduate with cans of Budweiser.