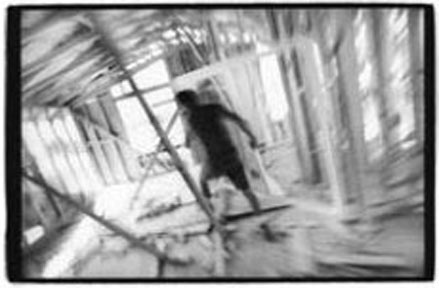 There is nothing dreamlike about “Dream Street.” Nightmarish is more like it. Doug McCulloh, a photographer with a conceptual slant, was a neighbor of a soon-to-be housing development in San Bernardino County when he entered a contest to name a street. His winning entry, “Dream Street,” started him on an odyssey to photograph, first, the rough-hewn residents of the former farming community, then the poorly-paid workers there, and construction in progress. Finally came the nearly-finished almost identical houses--reminiscent of Pete Seeger’s “Little Boxes.” His sequential black and white images are shot from odd, askew angles, often with obscured lighting. And each photo has its own poetic description by McCulloh. “New fences had fingered out into the neighborhood, three boards to the foot, four nails to the board,” he writes. The photos, taken before the housing boom went bust, are almost prescient, predicting the financial devastation about to occur.