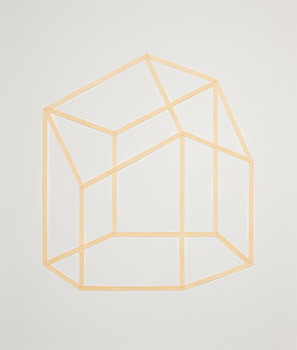 Although Ted Laredo's works are all about dimensionality, they appear to be shockingly flat. When viewed from the gallery's balcony level and in the darkness provided on the opening night, these works that are made of phosphorescent acrylic paint on tape or panels, certainly come into their own. In the light, what Laredo calls his "mono-diptychs" are perversely flat. By contrast, they float and glow through space in the dark. His "necker cube," a monumentally scaled mural-like honeycomb cell constructed of cotton-twill tape brushed with phosphorescent paint is enlivened by the dark, bouncing optically upward, downward and back again infinitely.

In the gallery's press release, Laredo states, "The solidity of the monochrome gives way to an ethereal inner light." Here he is speaking of his single-hued paintings on wood panels lined with reflective-glass micro beads. Unspectacular in the daylight, these works achieve depth as their edges go optimistically day-glo bright at night. At first glance Laredo seems to have been contemplating Ellsworth Kelly's shaped, monochromatic paintings; further consideration by the viewer may reveal a willingness to prove that geometry is destiny - and, at least in terms of dimensionality and profundity, density.