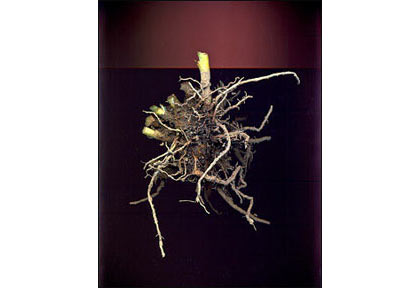 Rather than photograph plant life thriving and decaying in situ, Jane O’Neil brings a flatbed scanner to her backyard and scans birds of paradise, persimmons, and gnarled root balls. In her manipulation, handling, and recording of delicate objects O’Neil transforms natural elements into computer-generated objects. Therefore the prints in “Environmental Memory: Part 1--Home Grown” depict subjects that no longer exist. Instead O’Neil’s digital c-prints become the memory of her former home grown environment. Whether it’s “Apple Cactus,” depicting a rotted and blackened apple staged next to a cactus (a symbol of longevity and endurance), or “Prisimmion #1,” in which O’Neil has granted us access inside the dying petals, “Environmental Memory” is a show about transition. “Root Ball” is an unearthed web of roots that appear to continue growing with ferocity even though they have been removed from the soil. The root is drenched in contrast--as it is still stained by the dirt and overexposed by the glare of the scanner. By uprooting the root ball, O’Neil demonstrates that “we’re all in transition,” and confirms that we are never living in a single environment but moving from one to the next.