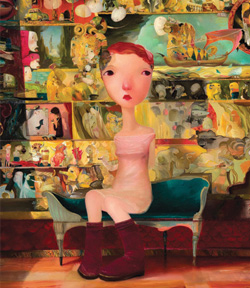 The paintings of Joe Sorren are childlike, cartoonish, dreamlike and lowbrow. But to so label them is to trivialize them. These seemingly innocent works are the product of a world-class painter, albeit a modest one, who paints for the sheer joy of it, who understands that the journey of making art is art itself, and that a finished painting is the beginning or inspiration for a subsequent painting. Each of Sorren’s colorful works is a complete scene, a slice of life, inhabited by round-headed, child-like, shmoo-like characters. The series consists of characters with soft edges, in soft hues, all with soft, short hair, at play with balls, in exotic forests, on the beach, at elegant events in gowns, relaxing in bed, posing for a painter.

Sorren says, “I start out on a new canvas, with the idea vaguely pointing the direction. Sometimes this can lead to new perspectives and associations within the painting.” As a whole, the works present an imaginary world somewhat reminiscent of Tolkien’s Middle Earth. Several sculptures, created in collaboration with Jud Bergeron, depict similar characters, although more rough-hewn, giving the viewer a literal space to see and now to cohabit.