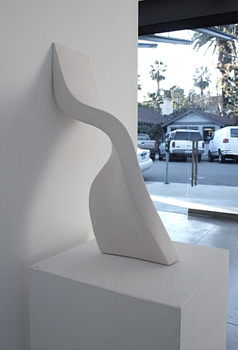 The paintings of Steve Burtch and Victor Kreiden, and the sculpture of Stephanie Bachiero in "Introductions: Three Emerging Artists" lure us into a soft abstraction that subtlety creates a tension between object and surface. The exhibition starts with Kreiden's paintings that resemble melted hard edge abstraction. They have a finish that resembles stone, which is in sharp contrast to the warped curvature of his canvases. The geometric subject matter is refreshed through this relationship. Burtch's traditionally square canvases are instead wrapped in mylar, which creates a screen allowing the under drawing and mixed media to peek through in a soft and indistinguishable manner. The vertical rectangles arranged across "No. 100007" are evenly distributed and appear kinetic as the shades of white create tension between the negative and positive spaces. Finally, the reflective sculpture by Bachiero are slabs of ceramic that twist and turn on their pedestals so as to imbue each piece with movement. The gesture of "Push" is typical of this energy, with which it strives to create more space by seemingly moving the wall against which it is set.