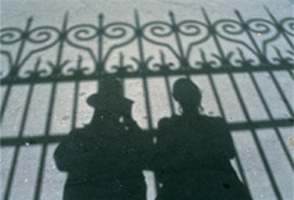 The highlight of "Photo Environment" a group exhibition featuring the work of eighteen artists from the U.S. and Canada is an installation by Quebec-based Diane Landry. She fuses high and low tech to create evocative works that explore time and movement in innovative ways that take the premise of the show - twist up the idea of a photograph, the environment and image presentation - to an extreme. Using the spinning mechanisms of a functioning washing machine, she creates two portraits of women whose heads bob up and down with the motion of the appliance. Tripped by a sensor, it starts up when a viewer enters the space. The whirl of the machine draws views up close, where a disk houses 12 portraits that become an animation when reflected in a 12-sided mirror placed atop the washing machine.

The majority of works here consist of landscapes and other outdoor scenes that appear beautiful and/or bucolic, but have darker psychological messages that express their current perspectives shaped by matters such as the economy. James Hill's "The Long Cold Summer Project," a large, free form mixed media and collage work, depicts traditional images of summer: trees, car interiors, small bedrooms, statuary and watches. But while the images are familiar, the total effect is of chaos and depression. Rick Steadry's "Shadow Gate," from "Love Letters from Paris," is a large and haunting photograph of a couple's shadows (Steadry and his wife) set against an ornate Parisian gate. The image is made especially poignant by the fact that it was shot by the artist shortly before his wife passed away. Barbara Higgins' "Femmes a l'Opera Garnier, Paris," a collage photo of store mannequins in bras and panties against a traditional opera house exterior, contrasts our personal transparency today with the dressed up world that many of us grew up with. Other striking images include a portrayal of empty gun shells besmirching a desert landscape, "Shells in the Desert" by Blade Gillisen; and luminous, flowing water scenes, "The Waters," shot in several different countries by Chinese artist Zhou Ning.