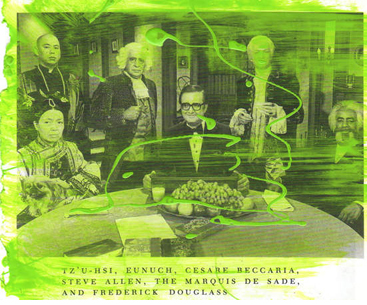 Like a three dimensional, media enhanced take-off of the game of "Telephone," Stephen G. Rhodes' untitled installation overfills its host gallery, leaving barely enough room for visitors peering into his dramatically lit, cluttered construction to walk around and contemplate the chaotic set from a variety of vantage points. Rhodes suggests that history is bound to be re-written, looking and sounding like a re-invention every time it is told. This presentation is inspired by Steve Allen's award winning television show, "Meeting of the Minds," a late 70's PBS production in which actors, appropriately made up and costumed, played roles of various famed figures from history, sitting down to exchange points of view.

Rhodes' installation suggests the disheveled remains of the set where Allen might have invited his wife Jayne Meadows to act the part of Catherine the Great or Florence Nightingale in conversation with someone like Attila the Hun. Rhodes' film plays into the space, which resembles the remains of an abandoned movie set, trashed after a wild party. It is impossible to construct any one "true' interpretation of what happened here. We are left on our own to piece together a narrative, based on the clues Rhodes has artfully strewn about.