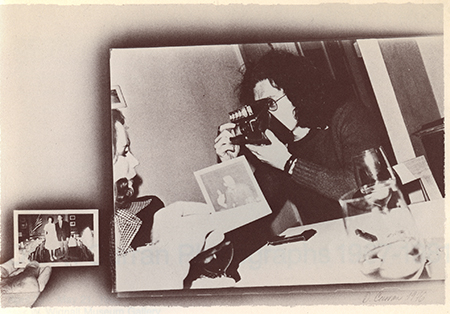 Employing photography as medium calibrated to illustrate ideas stretches back to the mid-19th century. However, the term “Conceptual Photography,” to which this show’s title alludes, grafted itself onto the more generally applied Conceptual Art aesthetic that first emerged in the 1960’s. It altered and challenged virtually every art form from that point forward. Indeed, the L.A.-based photographer and teacher Darryl J. Curran tirelessly integrated and extended photography’s conceptual strategies into his work as it evolved and morphed through the art world zeitgeist for decades. Both orderly and lyrical, this show is a small but nourishing retrospective that places Curran’s work rightfully alongside other artists who pushed photography in a range of innovative ways, including Robert Heineken, Betty Hahn, John Hilliard, the recently departed John Baldessari, Ed Ruscha, David Hockney, Cindy Sherman and others.

The show follows Curran’s work as it progressed from a documentary-like framing of the political and social activism of the 1960’s, into the textured, luscious and collage-like images in his most recent photographs. Throughout his career Curran has both assembled and deconstructed images via a deft stretching, manipulation and use of photographic printing processes (including camera-less image making) available prior to and since the advent of digital tools. For example, the artist produced the many beautiful and ghostly pastel-hued Photograms seen here by placing objects directly on light sensitive paper, fabric or other material, which Curran then exposed to light and processed. A 1980’s series of geometrically composed, colorful urban landscapes resulted from a complex process called “In-Camera Color Separation.” These works evolved by matching together three black and white negatives that were exposed in sequence through red, green and blue filters using a tripod mounted camera. The resulting vibrant colors in these pieces, such as the bright cobalt blue of a cloudless sky, were produced by Curran’s mixing together of what amounts to subtle gradations of black and white light. The effect is nothing short of magical. While it cannot match the scope of a museum-scale retrospective, this packed exhibition duly honors both an artist’s long and productive career as well as his significant contributions to the development of photography as fine art.