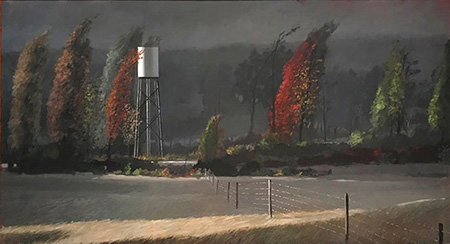 Nearing the height of his powers at 80, Norman Lundin’s new paintings concentrate on “remembered detail,” as he notes in the catalog. But more than that, they collectively, from painting to painting, are one autobiography of the artist’s lifelong studio interests: still lifes, the female nude and landscapes recalled from memory. Seen this way, they take on an expressive character belied by the crisp realism of his execution and flawless delineation of formal elements such as line, profile, shadow and color. Read symbolically, as “Art in America” corresponding editor Sue Taylor does in her essay, all Lundin’s oils are not only threads of images that resonate for him — the paint can, the easel, the window — they are allusions to the pantheon of art history, much of which Taylor summons from the dead to congratulate Lundin: Zurbarán, Bruegel, Vermeer, Morandi, Munch, Bacon and so on.

More pertinently, some of Lundin’s early foreign-student undergraduate and graduate years in Scandinavia are seedbeds for his later, moody, middle-class subjects. Like the great Danes of 19th-century painting, Vilhelm Hammershøi, Carl Holsoe and Laurits Andersen Ring, Lundin’s view is from inside the safety of the studio looking through a window, or in “remembered detail” of a gloomy, outdoor landscape. Fluctuating winter light is common to Seattle, Copenhagen and Oslo, three majors cities where Lundin has spent time studying art in museums and made his art as student or visiting artist. This informs the quiet, un-peopled art at this stage of his life: sensitive observation, meticulous effects to detain the viewer, and a pervasive sadness or loneliness one might associate with growing older, losing one’s close friends, as in the title of “Say Goodbye to Eddy O’Neil” (2019). Taylor drills deeply into the studio still lifes. I favor the melancholy expanses of the rainy Skagit Valley landscapes; they rejoin the world and leave memory behind.