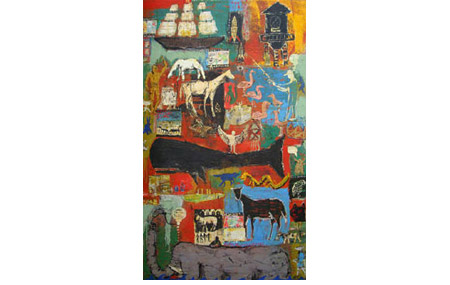 "Enter Chasing the Dragon Slayer" is Casey McGlynn's latest exhibition of canvas-rendered myth. At first sight, McGlynn's work reads like the staging of a child's personal fantasy; in reality, there is a serious and visceral expressionism occurring here, and what initially seems questionable about the artist's heavy and chaotic compositional choices begins to feel intellectually important as the smaller details reveal themselves. Within a complex choreography of dragons, buffalo, dolphins, flamingos and horses, these paintings deem animals our technological predecessors.

A painting of pre-historic whales is given new meaning with the presence of a submarine; in "Turtle makes local news," a horse is juxtaposed to trucks; while in "The ocean breathes the sky, the sky breathes the ocean," there are birds, many birds, and also a rocket ship. Beyond his animals, McGlynn is deliberate in his placement of human beings, an inclusion often so subtle we could almost be looking at further mythological creatures, or pre-historic versions of ourselves. But while there is certainly something primitive in McGlynn's work - the artist himself cites the influence of cave-drawings - his stylistic primitivism reflects an emotional complexity that is anything but. With bold color, hard lines and spatial distortion, McGlynn takes children's fantasy to an adult level.