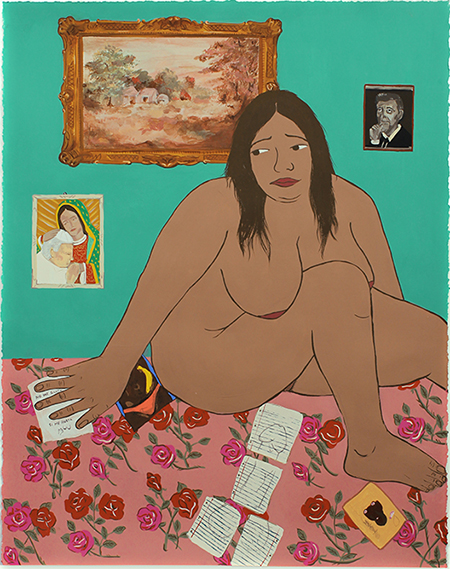 Red is the color of sex. And Joni Mitchell’s “Blue” refers to that color as “an empty space to fill in.” In an arresting exhibition, “Sola Chola,” painter and printmaker Gina Contreras expands upon a simplified palette of reds, pinks, blues, ochres, and flesh tones that comprise a spectrum of the emotions of sex, desire, and longing. With that palette she produces figurative works infused with stirring poignancy and power. In Spanish, “Sola” means alone. “Chola,” Mexican slang, refers to a girlfriend of a gang member (cholo). So the show’s title literally means “girlfriend, alone.” In most of these self-portraits, we feel the life of this solitary girlfriend and her voluptuous, fleshy figure that evokes a 21st Century Rubens. The title painting, “Sola Chola,” depicts the female subject sitting naked on her bed, grasping a letter as she stares at a tiny photograph of a handsome man perched on a nearby pillow. She happens to also be leaning on a live tiger. Brilliantly funny, this fantastical combination of elements captures the combination of vulnerability, want, danger, uncertainty and huge emotional risk that comes with every new relationship.

The treasures of the exhibition, however, are the smaller, minimalist works wherein Contreras pares away the details of her subject. The subject matter is defined almost completely by color and shape. The figure sits alone, naked, on the floor, leaning against a wall or squeezed into a corner. Matisse’s colorful figurative cutouts captured the posture of joy and ebullience; Contreras’ figures, in contrast, are solitary and still, staring into space, waiting for something to happen. It’s the posture of longing. Her ingenuity lies in this formal strategy — the figures travel deftly from the specific to the universal, becoming outlines that we all can color in with our own moments of rejection and despair. Their simplicity and quiet belie their overwhelming emotional force. They mirror the cycle of anticipation, discovery, obsession, longing and ultimately the devastating heartbreak that comes from wishes unfulfilled.