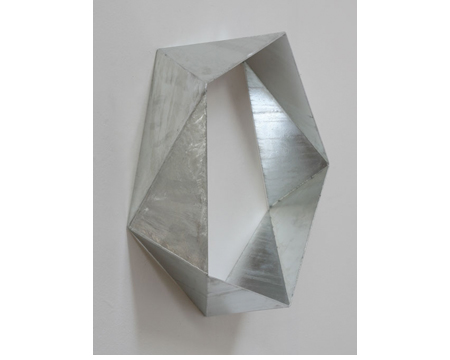 In "Skyscrapers," Peter Millett's latest exhibition of sculptures, bending is the exercise of the day. Metal-bending specifically, concept-bending in general, and an earnest effort in mind-bending are par for the course here. Millett's wood and metal sculptures are veritable impossible objects come to life, only it is exactly their three-dimensionality that maintains each object's topos of ambiguity. Front edges, traced by active eyeballs, lead seamlessly to backsides. Rectangles yield triangles whose twinned points form absent squares. It's a smart extension of the time-space conundrums fascinating to cubists. "Open Square," a large-scale work of welded steel, momentarily incarnates the Penrose Stairs, appearing to achieve, at first glance anyway, that which its two-dimensional counterpart cannot - a paradox in three dimensions.

"Twisted Pentagon," similarly, seems a galvanized steel Möbius Strip personified.  Its edges undulate effortlessly, demanding touch to annihilate the illusion that sight has so wrongly and readily confirmed. Like the exhibition's title structures, each of Millett's wall-sculptures is a modern marvel: eye-catching, startling, sleek and suspect. His large-scale works, however, are much more solid and imposing. While they require equal consideration, their lines and edges are far more easily perceived.  One, entitled "Hot Seat," could be some mutation of future-gothic dining furniture, or a giant charcoal chimney.  Or a sculpture, awaiting new perspective.