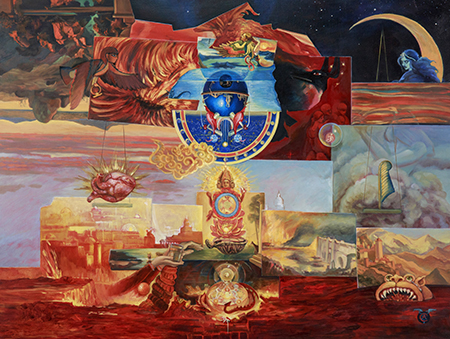 Symbolism abounds in the work of Carrie Ann Baade, a Florida-based artist who grew up poring over art books, before studying painting in Italy and earning two art degrees. Baade culls images from art history, and blends them with visual cues from contemporary culture, adding her own feminist perspective and autobiographical twist. Her paintings are filled with visual cues, hidden clues on a treasure map: a wing, a turtle, a skull, a solitary eye. Baade is distinguished from being an appropriator due to her smart use of the source material and wickedly wry take on the world.

The eight works here are comprised mostly of oil paintings on linen or panel. The artist’s practice centers around seeing, cutting out, and saving images for her expansive archive of collage materials, from which she chooses those images to combine and build upon. Baade’s collage paintings also feature personal images drawn from her own memory, emotions and imagination. But her work will resonate most with those steeped in art history, and who recognize influences such as Bosch’s “Garden of Earthly Delights” in Baade’s “Allegory of Good Government.” But there’s plenty to ponder without having that frame of reference.

Baade describes her works as painted parables. They’re meticulously built with snippets of Renaissance and Baroque paintings, resulting in surrealist landscapes that nod to lowbrow pioneer Robert Williams. Collectively, they address morality’s perilous dance with relativism in spheres ranging from sexuality to the environment, but with a decidedly feminist take. At times Baade’s symbolism is subtle, but that’s certainly not the case with “Hell Mouth.” One of the show’s strongest works, it sets a universe inside a woman’s vagina, surrounded by teeth and flanked by two female figures. Thus, Baade is another who flips the script on art history, elevating women to the position of agency rather than making them mere props or objects for the male gaze.