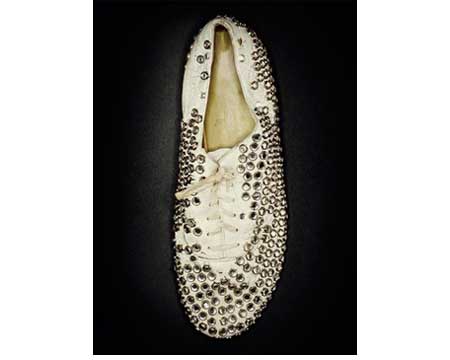 "Neverland Lost: A Portrait of Michael Jackson" is a dazzling exhibition of photographs by Henry Leutwyler. These close up color photographs of Jackson's studded gloves, decorated shoes and socks and jackets, as well as miscellaneous trinkets and toys are presented against a stark black background. Each object thus speaks for itself and, in a way, shatters the Jackson myth. While many of the items retain their glittery appeal, others show the wear and tear, the simple ordinariness of everyday objects. The glove, an iconic Jackson trademark, is presented as a disembodied object, and as such is both a powerful presence and a reminder of the power of the archetypes. The exhibition conveys an atmosphere of celebration, but it is also very much nostalgic and melancholic in that it depicts what was taken away from our popular culture. If the man is no longer alive, he is embodied here, remembered by what Neverland lost.