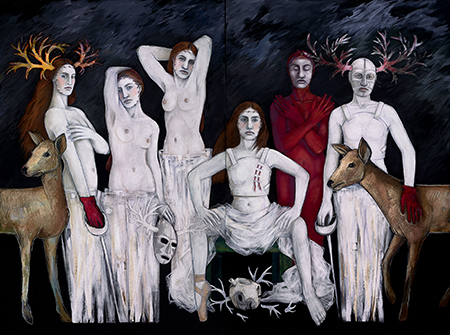 It is refreshing to see the 21 Chicano/feminist inspired works by Judithe Hernández in this exhibition. It’s long past due. For the artist — a founding member of Los Four, the 1970s Los Angeles Chicano artist collective — has not had a solo show in decades, while the other three, Carlos Almaraz, Frank Romero and Gilbert Luján, have had many.

Hernández’s figurative works are often boldly colorful illustrations of women and girls. She imbues them with political themes, including the plight of Mexican immigrants, with multicultural imagery, and with symbols from her dreams. The use of shadows, masks used by Mexican lucha libre wrestlers, and flowers drawn onto statuesque female bodies are consistently vivid. With the latter, she favors calla lilies, as, “They are symbols of purity and femininity (for their beauty and reproductive qualities),” explains curator Edward Hayes. The most commanding drawing is “Les demoiselles d’barrio/Maidens of the Barrio” (2013), referencing Picasso’s “Les demoiselles d’Avignon” (1907). Hernández’s women are more literal than Picasso’s, with each boldly displaying her nearly nude body. Each wears a lucha libre mask, indicating that these women, who are clearly not the prostitutes Picasso saw, are confronting the world, while their true identities are hidden from it.

“Death of the Innocent” (2015) depicts a dead girl who lost her life immigrating to the U.S. The artist recently added a ribbon to the child’s hand, which reads, “we come here but to dream.” Explains Hernández, “… I added the ribbon in the child’s hand with the real reason immigrants come to this country.” The beautiful young woman in “The Unknown Saint from the Juarez series” (2017) wears a flowered tunic as she lays among cactuses, gazing up at the moonlight. It references the “femicides” that occurred near the artist’s mother’s childhood home of El Paso. “The Black Hand” (1983), “Jungle of Fire” (2007), and “Save yourself, Mexico!” (2010) depict women with black masks or shadows across their eyes. “At the Age of III from the Juarez series” (2016) depicts a woman with her mouth bound by a cloth. Their liberation remains off stage.