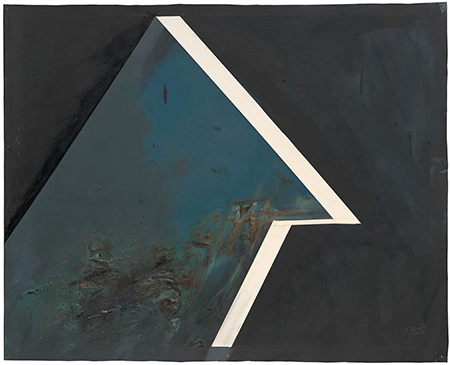 Jay DeFeo (1929-1989) is best known for her legendary painting “The Rose,” a more than ten-foot tall structure made of 2,300 pounds of oil paint, which she began in 1958 and worked on into 1966. Created using alternating processes of building up thick paint and then chiseling into it when hardened, “The Rose” features a gigantic starburst image, in massive sculptural relief, which the artist viewed as a symbol for life and death as sequential parts of a continuum.

DeFeo’s current exhibition of mostly small works on paper from the 1980s reveals the finely honed mastery of paint handling and composition of a mature artist at the top of her game. Interested in balancing dualities such as flat and illusory space, thick and thin pigments, as well as painted and unpainted surfaces, DeFeo can be seen here exploring a range of possibilities. As is common in her oeuvre, some of the paintings are clearly in dialog with one another. In one of the more playful works, a dark, densely painted, centrally positioned tilted triangle appears to float against a field of gray and beige gestural brushwork. In a related work, the triangle is light gray and thinly painted, while the area encompassing it is thicker and predominately black. The latter work is also differentiated by compositional eccentricities, with its lower left dominated by a large, evenly painted, beige trapezoidal area that serves as an effective foil to the forceful movements of the composition’s slightly larger upper right section.

At times DeFeo ventured into autobiographical territory, as in her painted homage to the San Francisco art critic Thomas Albright, who was terminally ill with cancer at the time she painted “Homage to Thomas Albright No. 4.” Divided into two irregularly shaped sections separated by white tape to resemble an intriguing architectural passageway into regions unknown, this work poetically recycles the life to death theme of “The Rose,” while paying poignant tribute to one the artist’s most fervent supporters.