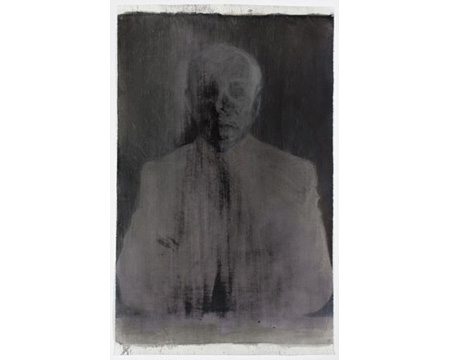 On the heels of his strong showing at this year’s Whitney Biennial, Storm Tharp explores Roman mythology, 20th Century art, and contemporary popular culture in his genre-blending exhibition, “Hercules.” Tharp is best known for his virtuosic and intuitively composed ink, gouache, graphite, and Magic Marker drawings on paper, many examples of which are on display in this show: two images based on the late artist Ad Reinhardt; the gray-tinged “Man behind a Desk;” “Groton House,” whose subject’s face is half-obscured by graphite; and the two-panel portrait, “The Decorator,” which makes effective use of negative space.

In addition to the portraits, the artist also includes a more recent vein of work: color-field paintings such as the hot-pink étude entitled “Perfect” and the washed-out pastels mounted side by side in “Vreeland.” The works’ titles refer obliquely, as is Tharp’s custom, such far-flung interests as Golden-Age cinema, art history, queer theory and more. Although stylistically disparate, the portraits and color fields share a propensity for subtle chromatic contrast and playfully esoteric conceptual linkage. The works are smart, immaculately executed, and above all visually seductive.