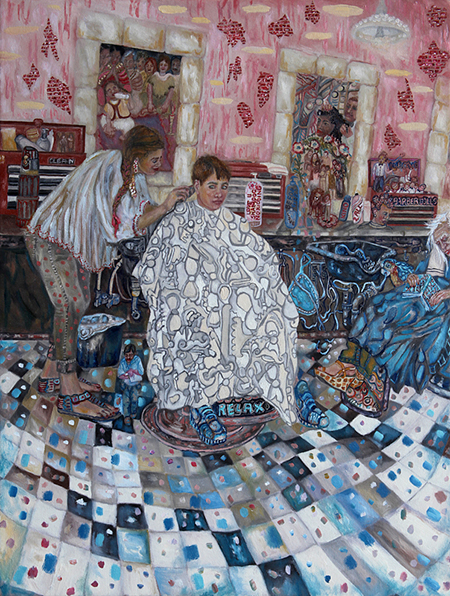 In her 20-year retrospective "PUBLIC SETTINGS...private conversations," longtime San Fernando Valley resident Jodi Bonassi proves that there is more to the Valley than the media trope that it is a vapid cultural wasteland. A keen observer of people, Bonassi draws inspiration from the Valley's diversity, and has adopted favorite hideaways for sketching folks enjoying the convivial atmospheres of cafes and barbershops, exploring the maze-like structure of malls, or riding the Red and Orange Lines of the L.A. Metro. Her practice, which she calls "observational drawing," is to sketch on site the people and surroundings that fascinate her, and then develop the imagery further in labor intensive narrative paintings that, to some extent, recall the staged scenarios of the late Los Angeles painter Joyce Treiman, whose imagery was similarly part fact and part fiction. Friends, family members and the artist herself are freely inserted into the compositions.

Also like Treiman, Bonassi is adept at sensitively individualizing each depicted personality, but her visual storytelling is far more complex and intricately detailed, with multiple vignettes often occurring on various scales and in unlikely places within a single work. Additionally, Bonassi's paintings are fun to look at, as they are enlivened by a striking formal interplay of fanciful patterning of floor tiles, wallpaper, clothing and signage, as well as by a slightly distorted perspective. The latter trait is particularly effective in "Barbershop Dolls" and "Dew Drop Inn Too," where undulating flooring tilts towards the viewer's space, inviting us to board Bonassi's charming magic carpet ride.