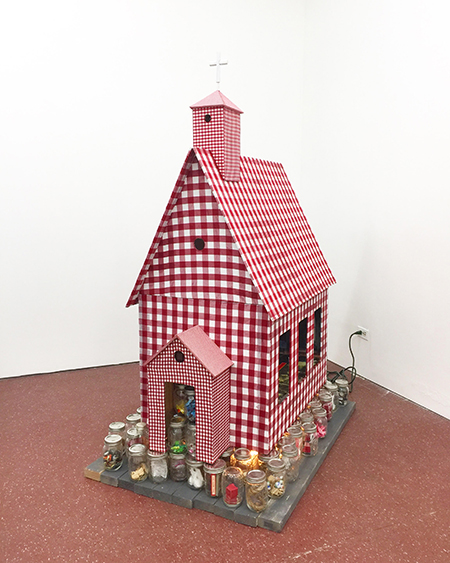 Chicago artist Jomo Cheatham’s show is inspired by a rumor. Within the last decade, it was suggested that the word “picnic” was derived from the practice of “picking a n****r” to murder during the height of Jim Crow-era lynchings in the United States, though this story of the word’s origins was eventually debunked. For Cheatham, this specific debunking of the word “picnic” is not the point; the fact remains that the circumstances it referenced were real.

The central sculpture, “Structure N.1,” of Cheatham’s exhibit “Reparations for Interruptions,” is a scale model of a church covered in red checkered fabric, surrounded by found objects, and papered on the inside with historical photographs of public lynchings. The horror of the murdered bodies is potent and visceral, though the artist asks us to also consider those individuals in the photos who are standing idly by, superimposing the words “Do you recognize me?” alongside their faces.

Throughout many of Cheatham’s 2-D pieces, caucasian figures cut from black-and-white photographs are ensconced in their gingham churches, peering out the windows. With these works, the artist not only highlights one of the blatant atrocities that often gets white-washed in our nation’s history, but in a wider and very contemporary manner, challenges viewers to consider the hypocrisy that exists when we align ourselves in theory with a moral principle, but do nothing but watch as actual discrimination or worse unfolds in front of us.