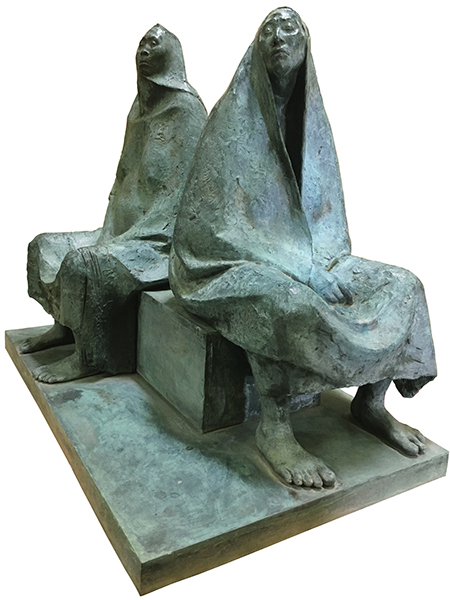 There is something soothing and liberating when looking at Francisco Zuniga’s sculptures and drawings of women made between the mid-1950s and the mid-1990s. For one thing, his women don’t comply with today’s beauty standards. For another, they don’t seem to struggle with the traditional female role. There is an obvious acceptance, such as in the charcoal and watercolor work “Maternity” (1966), in which a woman breastfeeds her young toddler. The subtle colors and her embrace of her child create a sense of harmony, a subject matter of relevance in this year of the woman, because it’s not only gender equality we should aspire to but equality among women across the globe. It’s about the freedom to choose to live a life according to one’s own values without facing any stigmatization. And not all women want a career.

Even though Zuniga’s women are being portrayed in traditional roles they appear powerful, but not in the sense that we understand the term today. They’re not shown in leadership roles or as participants in important political meetings, but as human beings who give life and create close and meaningful relationships. In “Madre e Hija Sentada,” (1975) a large-scale bronze sculpture and the centerpiece of the exhibition, two female figures are sitting in close proximity with their backs to each other, gazing in different directions. Although they seem exhausted and a bit cheerless, there is an unspoken intimacy between them, or as art historian Carlos Echeverria phrases it, “their massive cloaked forms rise from the ground almost like the twin volcanoes of the valley of Mexico, primordial and mysterious.” The exhibit sparks reflection on motherhood, feminism and identity.