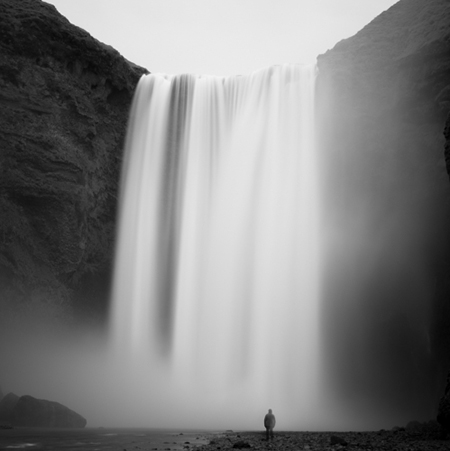 In a metaphorical sense, Jeffrey Conley’s “Reverence” is an antidote to all the problems in the world. His photographs have an instant calming effect and provide a retreat from the overwhelm by technology, the city’s chaotic energy, and one’s general awareness of human suffering in the world. The photographer says, “For as long as I can remember I have felt most at peace outdoors. Nature has always been my refuge and sanctuary.” And this sense of peace radiates from stunning black-and white photographs, which were shot in different parts of New Zealand, Iceland and the state of Oregon, where he lives. His images of waterfalls, wintry landscapes, and light reflecting on water, transcend the viewer into a ‘mushi’ or Zen-state of mind. The silhouette of a man in “Cascade and Figure” places him in front of a giant waterfall that seems to be whispering to him. Even though the masses of water cascading down evoke the idea of great force, the feeling is softened by the surrounding fog. In “Tide and Couple Walking” we see two black dots on the upper left corner on a milky white background, which at first glance looks like sand dunes, but it is the ocean. As the title of the photo suggests, the dots are a couple walking shot from a great distance to emphasis on their togetherness in solitude. Conley’s images convey how one can be re-energized by spending time immersed in nature.