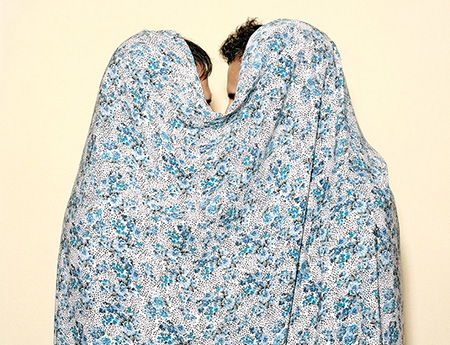 Laurence Rasti, “Untitled," 2014, from the series "Il n’y a pas d’homosexuels en Iran (There are no Homosexuals in Iran)”

“Disruptive Perspectives” curators Allison Grant and Nadine Wietlisbach cite photographers like Robert Mapplethorpe and Catherine Opie as their art historical precedents. This show explicates the multiplicity of experience when it comes to gender and sexual identity. As is inherent in the theme, works throughout the exhibition boldly make the private and intimate into an experience that is both candid and public. In works by Zackary Drucker and Rhys Ernst, Alexandre Haefeli, Laurence Rasti, Jess T. Dugan, Leonard Suryajaya, Lorenzo Triburgo and Barbara Davatz, the artists and their subjects share their pains, fears, loves and triumphs.

In the first floor galleries are examples of artists finding and defining (or defying the definitions) of selfhood. In Davatz’s “As Time Goes By,” in which multiple portraits of couples are taken over decades, we follow subjects as the nature of their relationship status changes: gay, straight, with children, single. Dugan’s “To Survive on this Shore” lauds trans women and men over the age of 50 with portraits, with accompanying written accounts of their individual stories. These share a narrative arc of struggle that eventually leads to self-acceptance and community.

If much of the artwork on the first two floors reminds us of how far society has progressed, works on the third floor serve as a reminder how much has yet to be done. The subjects in Rasti’s “There Are No Homosexuals in Iran” (a reference to Mahmoud Ahmadinejad’s statement in 2007) hide their faces for fear of government sanctioned violence. It is an expression that takes us feel both official and unofficial pressures that keep LGBTQ people from living their true selves in public.