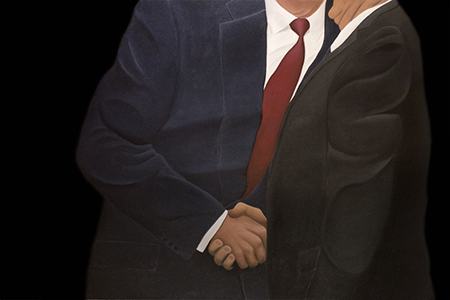 A group of four solo exhibitions all address political and social issues in myriad ways. Upon entering the gallery one is confronted with John Rosewall's powerful paintings of individuals against dark backgrounds with gesture rather than facial features. Rosewall culls his source material from news images, distilling the detailed documentary style photographs into abstract and expressive images. Entitled “Grip," his paintings center on hand gestures like chokeholds that allude to the ambiguity of the original, and the intensity of the depicted moments. The works are about power, specifically the abuse of power, and depict victims of violence, repression and exploitation. Through his painting, Rosewall communicates an aspect of the human condition beyond the topical references. By emphasizing them as aesthetic images first, he avoids the trap of aestheticizing violence.

Karchi Perlmann’s "LA Rhapsody-Super Moon / Opus No. 1" is a 270-degree photographic panorama 62 feet long, depicting multiple scenes of Los Angles all at the same time. The image is a technical feat that focuses on predictable as well as unusual moments in the city. Also featured are Ken Weingart's documentary style photographs from his series "Motel Stories," as well as Flora Kao's beautiful and evocative large-scale room-sized rubbing of a colonial storehouse in Taiwan.