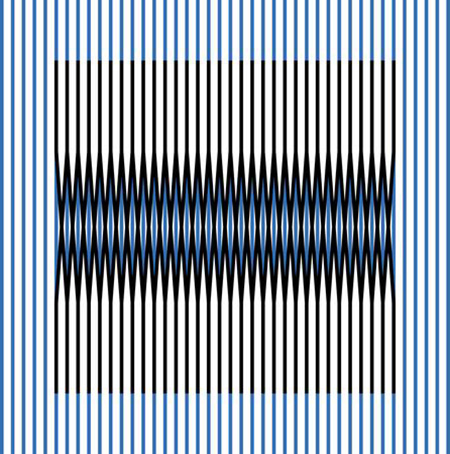 Although Venezuelan master Carlos Cruz-Diez is 94, he shows no signs of slowing down. It took him a while to figure out his true passion, but once he did, that was it. In the early 1950s, he had a crisis of sorts and turned to complete abstraction, deciding that art was pure invention unrelated to the world around him. He also realized that he loved color, color that is autonomous and exists independently of form. He had a breakthrough when he noticed that when he put two painted color blocks side by side, they colored the air between them with a third color. “The eye is a device built to explore, and if you put red and blue side by side and step away, the eye will perceive yellow,” Cruz-Diez said. He has a vivid childhood memory of being fascinated by the sun shining through glass bottles in his father’s soft-drink factory, casting colored shadows around him (from Oscar Lucien's 2006 documentary on the artist, “Life in Color”).

Among the eleven pieces included here, four are large freestanding sculptures and seven are wall pieces. “Transchromie Dames A” (1965/2009) greets us at the door, and “Transchromie” (1965/2007) dominates the main gallery. Both are translucent sculptures made from long, narrow strips of colored Plexiglas arranged vertically. The latter is suspended from the ceiling, while the former is arranged in a stainless steel frame. Both mix colored light to create additional colors depending on the viewing angle. Another highlight of the show is “Physichromie Panam #259,” part of an ongoing series Cruz-Diez calls “Physichromies," a term he developed in the 1950s that means “physical color.” At six feet tall and nearly 18 feet long, the large wall work exemplifies the critical role the eye of the spectator plays. As one walks from one end to the other, the colors of the piece shift dramatically.

Cruz-Diez dropped out of high school to attend the School of Plastic and Applied Arts in Caracas, where he studied with kinetic art pioneers Jesús Rafael Soto and Alejandro Otero. He became interested in the impressionists because they understood that light is ephemeral and ever-changing. The artist and his wife, Mirtha, left Venezuela in 1955 because there was “no opportunity or respect for artists” there. Their ultimate destination was Paris, but it took years for the artist to give up his work in advertising. After living in Spain, they finally arrived in Paris on Oct. 12, 1963, where Cruz-Diez studied Delaunay, Albers and Mondrian, experimenting with color to make it look as though his surfaces were vibrating the way it does in Mondrian’s “Broadway Boogie Woogie” (1942-43). Today, Cruz-Diez lives and works in Panama with his children and a work force of assistants who facilitate his major commissions. He has two public art projects in Houston: colorful crosswalks painted on the street outside the MFAH (2009), and “Physichromie Double Face” at the University of Houston (2007), a serpentine wall of colorful stripes.