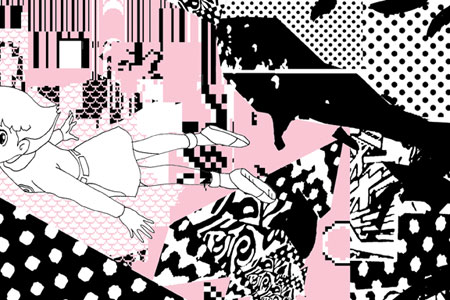 There is a Babel of digital patterning in the new paintings of the young artist Brent Ozaeta. Dots and bar-code lines compete with pixels and repetitive cruciform figures receding in patches of harum-scarum space. Occasionally a human figure appears amid the fray. In 'Traveling,' a cartoonish little girl inspired by the designs of Japanese anime soars not so much through space but on top and in the midst of flat layers of fragmented designs. The tight-edged, flat matte finish of the surfaces of the silk-screened paintings disguises their labor-intensive making. Each is the product of 18 lithe pulls across stencil-laden screens. The limited color palette - fuchsia, black and white - renders the paintings decorative. In the white noise of mixed form Ozaeta brings home a well-worn message in the even more well-worn medium of painting, namely that we, like the rocketing girl in 'Traveling,' are hurled through a world of ever-evolving digital information.

Though similarly hindered by a readymade consumerist feel of delectability (think Urban Outfitters products rather than art), 'Little Girl Dentists' strikes a deeper sense of the uncanny. The image depicts two young girls wearing surgical masks as they operate on a man whose face dissolves into a blur of pixilated form. In the installation of cardboard boxes, 'Bricks,' Ozaeta's penchant for tri-color computer generated patterning is more convincing. Stacked into the corner of a small separate gallery, several 8 x 8 x 8' cubes bear the patterns of the paintings. As brown-pixel covered boxes sit atop pink-pixel covered boxes, the idea is that the flat screen-generated visual information of the computer is the new three-dimensional matter of our existence. Ozaeta tweaks Descarte's Cogito ergo sum yet again, transforming it into Navigo ergo sum - I surf therefore I am.