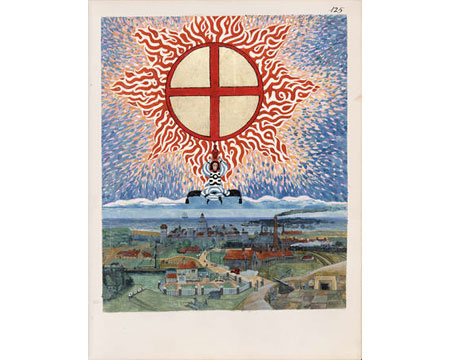 Carl G. Jung, from 'The Red Book,' at the Hammer Museum.
© Foundation of the Works of C.G. Jung, with permission of the publisher, W.W. Norton & Company, Inc.

Nearly 50 years after analytical psychiatrist Carl Jung's death, his two hundred and five page, vividly illustrated 'Red Book' (1914-1930) that's been recently released from a locked Swiss safe deposit box, is entombed in a glass display case on public display. Only two pages at a time of the original text can be exposed to view. However, at a reading station nearby, four copies of its recently published facsimile are made available to those who would like to get their hands on simulations of the text in which Jung worked out his theories on individualism, archetypes and the collective unconscious.

A Tibetan mandala collected by Jung joins a series of his own paintings and drawings that line the walls of the exhibition room. Typed drafts with handwritten corrections and two of Jung's earlier, fantasy filled 'Black Books'are also on display. A video mounted outside the gallery fills in the gaps. The show inspires a variety of related programs: discussions with artists, filmmakers and analysts, as well as an overnight sleep-in at the museum. Pleasant dreams everyone!