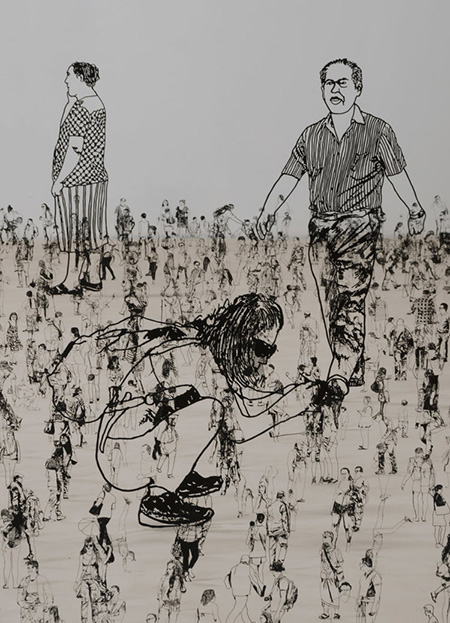 Zadok Ben-David’s engrossing exhibit “People I Saw But Never Met” offers a reflection on the human condition in a globalized world, which is currently on the brink of regressing. There is Brexit, the renegotiation of NAFTA, anti-immigrant sentiment, and a generally increased anxiety towards the other. At the same time, we’ve never been better connected than now through high technology, which has its own pros and cons, social isolation being one of them. Hence the relevance of Zadok’s beautiful and delicate show, which consists of 30,000 chemically etched miniature and 45 hand-cut aluminum figures, all of which build on the concept of integration.

In the main gallery, his figures are installed on a sand-covered floor, which formally serves to join them together. The visual rhetoric suggests that we are one people, one world, coming from the same root. This is what ultimately connects us as human beings. Zadok’s figures are inspired by photographic impressions taken on his travels to Europe, the U.S., Central Asia, far East Australia and Antarctica. These stress the wonder of the simple and ordinary — such as a man taking a photograph, a Japanese woman protecting herself from the sun with a fan, or a young woman attempting to do a handstand. What’s so impressive is the cumulative visual and thematic effect that the throng of transparent figures have when grouped together in one space.