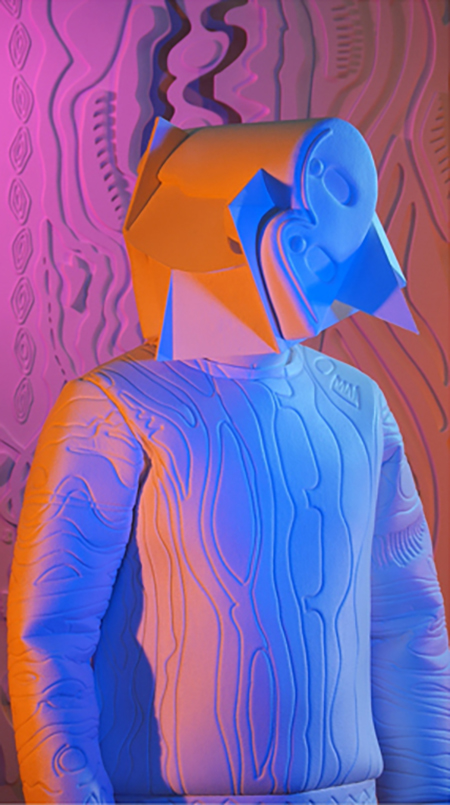 With "In Lieu of Flowers Send Memes,” Brian Bress' work has evolved to the next level of sculpture-becoming-video-becoming-painting hybridity. At any given moment in the viewing of one of his hi-def, wall-mounted video pieces, the fully costumed (perhaps you can call it "puppet-ed") character, bathed in a warm pastel light, exists along a short spectrum of stillness. This is alternately still enough to make the work stand as a digital painting, or else rotating very slowly, turning it into a moving video picture — albeit one that emphasizes its sculptural nature, both as a video/painting and in its actual presence in the room. It's this ambiguity, the oscillation between still picture and moving image, that Bress has especially honed, and it marks the apex of his oeuvre.

The show also includes actual sculptures, made from aqua resin and foam. They’re off-white, art deco-heavy objects, which echo the background sets from the videos, but ultimately come off as non-essential extra baggage, and simply an excuse to extend the show's sales opportunities. Meanwhile, an outlier among the video objects, "Looking (for Josef Albers)," combines video with a denser object-hood, featuring collaged imagery — all in gold — of archaeological objects making up the "frame" which surrounds two monitors, each of them containing a camouflaged, puppet-ed character performing slyly in their midst. It's another strong and notably evolved piece.