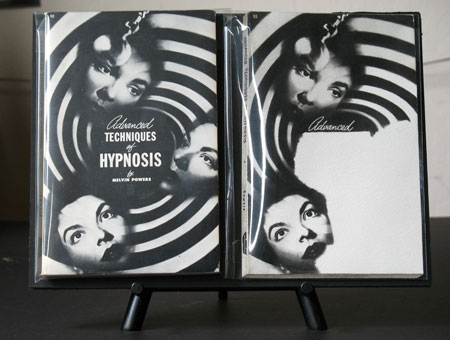 Ian Everard is a Santa Cruz based artist and illustrator whose intriguing exhibition investigates the relationship between the real and its image. Everard started out with the concept that he would acquire twelve copies of the book "Advanced Techniques of Hypnosis" and create an exact copy of the book each month. These copies were to be exhibited on tables in the gallery that resembled Everard's drawing table, each with a light and a magnifying glass. Finished or not, each drawing was sent to the gallery at the end of the month with a short note about the process or the fact that it was unfinished. Unfortunately Everard was only able to acquire 5 copies of the book, which was originally published in the 1940s and whose striking cover depicts three faces caught in a spiraling vortex. Complementing the installation of the twelve tables are drawings on vellum that juxtapose numerous book covers and the apparatus that Everard uses to magnify and draw them. It is clear than Everard is a skilled draftsman who can render at ease anything that he chooses to copy. What is of interest here is that he leaves many of the works incomplete, suggesting that what is absent has as much value as what is rendered and it is from those white spaces that the art emerges. It is less interesting to comment on Everard's talents than to wonder about his intentions and his choices of books to copy. There is also the fact that he insists on presenting the real and its double together. In addition to the static works, three animations are also on view encased in wall mounted black boxes. These fast paced works juxtapose image, drawing and sound that elucidates the process and the motivations embedded within the work.