Ben Jones
at Modern Art Museum of Fort Worth, Fort Worth, Texas
Recommendation by Charissa Terranova 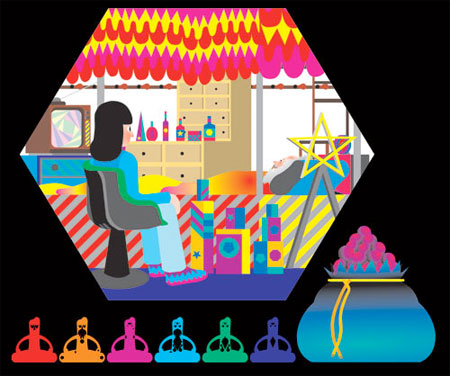 The stuff of Ben Jones' work wriggles in the in-between. It's all about layers of electronic light on matter and the performative space fired up betwixt the two. Jones did a live drum solo to launch this two-month FOCUS show, while his animations were projected on him and onto a screen behind. Titled "Dr. Doo performing Black Math," the performance brought alive the lobby of the museum, relating person to artist to drum kit to immaterial digital figure in a nexus of heat and perspiration.

New media artist, zine maestro, member of Paper Rad, and animator currently working on the West Coast, Jones catalyzes space in a similar play among digital beams, painted surfaces, and funky furniture, all in a dizzying palette of '80s style fluorescents. Two works, "MS Video Painting 1" and "MS Video Painting 2," find Jones projecting animations in bright colors onto multiple painted canvases hung edge to edge as though sound baffles. Abstract patterns in dayglow colors on the surfaces of the paintings heighten the hallucinogenic effect. Projecting on painted canvases proves to be quite the engineering feat, as the projections are made to play tightly to the edge of each set of rectangular surfaces.

Three-dimensional form takes the place of digital projection in the middle gallery. While more tactile, these forms are wholly of the ether, rendered from a grammar of an 8-bit microprocessor (think Atari). Two colorful wooden ladders, one hung vertically, the other horizontally, hang on opposing walls. A long bench shaped like a computer-generated dog sits between the walls facing "MS Painting 1," a painting made up of stacked canvases. The head of a person that looks like a computer-generated visage of Michael Jackson pops out of the flat space in the bottom panel of the painting. Jones sacrifices none of the delectability of high-art form to the bells-and-whistles substance of digital technology.