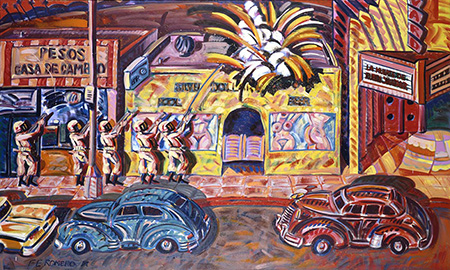 Viewing “Dreamland: A Frank Romero Retrospective” is to see a broad swath of Los Angeles through the eyes of one of L.A.’s major Chicano artists.  Indeed, this is the first solo exhibition of a Chicano artist at this museum — which until now exhibited Latin American artists exclusively. The septuagenarian Boyle Heights native’s vision of the city is well served by his execution. Many of his paintings are mural-sized, a few measuring more than 20 feet wide, while most feature vibrantly colored scenes against backdrops, manufactured and natural, illuminated by the glorious California sunshine. The artist depicts Chicano, Latin American and pop culture cityscapes, landscapes, erotic scenes, with several works incorporating memento mori themes via Day-of-the-Dead-style skeletons. More than 200 works fill up this venue, hinting at the sheer volume of Romero’s output over the course of a half century long career.

Romero has produced a humorous, often sharply ironic oeuvre while working in a narrative style that marks him a natural storyteller. The painterly caricature style is very much his signature. His evolving vision flows from personal experiences, public events and sheer imagination. Themes and objects in these typically lush paintings include 1960’s era sedans and station wagons, trains, buses, freeways, drive-in restaurants, movie theaters, landscapes with rolling hills, palm trees, hearts, skeletons, nudes, lovers, police and bandidos. Yet within these energetic works, he depicts the sometimes disenfranchised that many Latinos inhabit. “The Arrest of the Paleteros” (1996) is a deceptively joyous scene of a family being arrested along a freeway, a bright red sunset and palm trees in the background. The triptych “History of the Chicano Movement” (1999) portrays men on horses, women singing and playing, houses, freeways, cars and a full moon. “Cruising Whittier Blvd.” (2011) depicts brightly colored 1960s style sedans, coupes and convertibles, passing by a Woolworths, a Cowboy Theater and a neighborhood tamale joint in this traditionally Chicano thoroughfare. And perhaps Romero’s most iconic work, “Death of Ruben Salazar” (1986) commemorates the L.A Times journalist who chronicled the 1960s Chicano civil rights movement, until he was killed by a police tear-gas projectile in 1970.