"Pugin, Prisons, and the Plight of the Poor”
at the Huntington Library, Pasadena, California
by Diane Calder 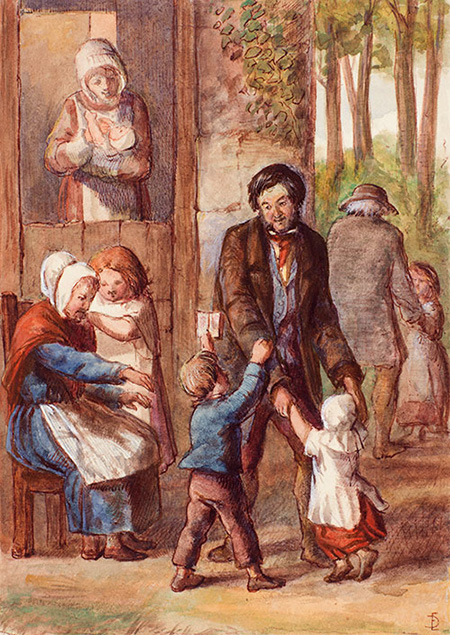 As bidders are making a variety of proposals addressing possible approaches to President Trump’s border barrier, "Pugin, Prisons, and the Plight of the Poor” aptly centers our attention on the idea that the style and treatment of architecture could have direct correlations to the manner and behavior of society. The objects drawn from the Huntington’s art and library collections, include prints, drawings and a rare book by British architect, draftsman, designer and architectural theorist Augustus Welby Northmore Pugin (1812–1852). He held firm beliefs linking architectural style with the role that edifices served in containing and punishing criminals, debtors, drunks, gamblers and paupers. In contrast to the environment depicted in a charming, mixed media work by Edward Gurden Dalziel, entitled “Children are the Poor Man’s Riches,” Pugin pointed to the architectural conditions imposed on the poor, who were typically confined to filthy, rat infested industrial city-prisons. Debtors and paupers were fed bread and gruel and often whipped, chained and imprisoned in solitary confinement. For Pugin, English Gothic architecture, with its soaring arches pointing toward heaven and its foundations "firmly grounded in the Christian virtues of Faith, Hope, Charity, Fortitude, Justice, Temperance, and Prudence,” offered a moralizing architectural structure that he theorized would stabilize and improve what was widely perceived to be an oppressed 19th-century society.