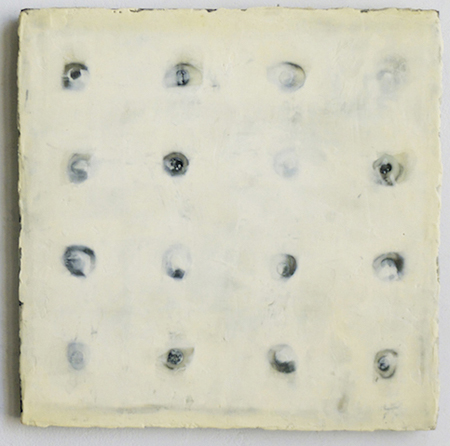 Michelle Stuart has been using nontraditional materials in her work since the 1970s. She has created site specific earthworks, large-scale sculptures as well as more intimate paintings and drawings, many of which are made with organic mediums including earth, wax, seeds, plants and ash. Influenced by archeology, botany, astronomy and history, her works straddle the personal and the universal.

The current show is comprised of a series of works from the 1990s, “Seed Gardens,” takes that hallmark of postwar art — the flat, impersonal, self-referential grid — and delicately infuses it with the organic. Stuart counters the words of critic Rosalind Krauss, who wrote in 1979 that the grid was “antinatural, antimimetic, antireal” and “is what art looks like when it turns its back on nature.” Her case is made through embedding seeds collected from her travels in squares of encaustic and beeswax. Mounted on the wall like paintings, the works are small, thick, and emanate a sense of intimacy and life; the seeds are rough and imperfect, the material they are encased in dense and uneven like Rashid Johnson’s shea butter sculptures. At the same time, though, the regularity and logic of the compositions is apparent. “Spring Thaw” (1998) extends the 4 by 4 grid of seeds to nearly the edges of the work, while “Spring” (1999) and “Dawn Light II” (1999) cluster their grids in the center. All the seeds are evenly spaced and most pieces are earthy monochromes. Both rhizomatic and rigid, Stuart’s gardens suggest the order within nature, the patterns and cycles that comprise the structure behind the wild and organic.