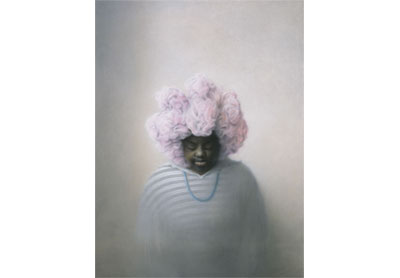 While most of us look away from those considered different, Tucson artist Chris Rush is compelled to study every detail. "Stare," a ten-year retrospective, features clinically realistic portraits of children and adults with mental and physical disabilities. Capturing his subjects with a mastery of the Conté crayon, Rush bathes them in a transcendental glow reminiscent of Mannerist portraiture but with a decidedly less postured slant. They are equated with an aristocracy that paid well to appear elevated. The question is whether we are seeing them as they are, or through a lens that is distorted either by intent or mere artifice.

At first glance, "Benjamin" appears to be a portly Florentine monk, regally posed and emerging from a simple gray background. Upon further inspection, however, we see that he is draped in only a soft pink blanket, his hand turned sideways and resting on his chest, his eyes gazing impassively in the distance. "Quite a few of my subjects," Rush writes, "have never spoken, and I'll never know what they are thinking." The point, as the exhibition's title urges, is to contemplate this slice of humanity unflinchingly, biases suspended, in an act that would not be appropriate to inflict on the real person.

The exhibit also includes drawings and paintings on found paper and objects, including 17th-century legal documents, love letters, and a Civil War-era grocery list, providing additional insight into human stories that, like his subjects, are strange but wonderful.