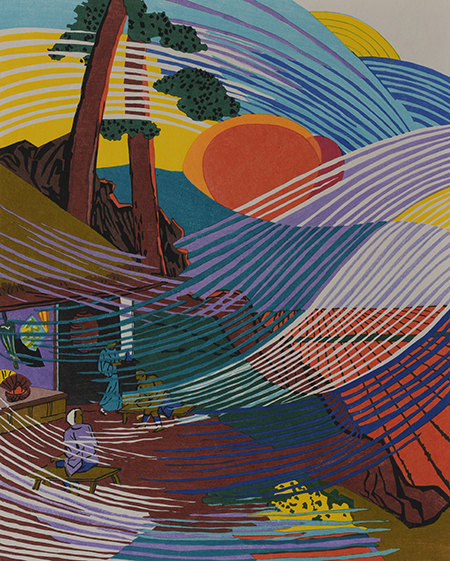 While Stanton Macdonald-Wright was probably Southern California's most important modern artist during the early 20th century, he was a frequent visitor to Asia and occasionally incorporated Eastern influences into his work. Yet few, if any of his paintings demonstrate his love for Asian — particularly Japanese — culture as clearly as does “The Haiga Portfolio.” This seldom seen selection of 20 works, created in Kyoto, Japan toward the end of his life in 1966 to ’67, employ traditional Japanese color woodblock techniques to illustrate haiku poems, and are printed on handmade mulberry paper. In fact, the artist had been an avid reader of haiku poetry since his first visit to Japan in 1937. The story goes that he was displeased with most haiku illustrations, which are called “haiga,” and finally decided to create his own. While these exquisite prints are primarily abstract, with two-dimensional Japanese influences, they include discernible figurative elements. “Cruel Heat, My Mind in a Whirl, I Listen to the Thunder Rumble,” for example, contains an abstract Buddha-like figure within a swirling environment. “An Old Pond, a Frog Leaps in the Sound of Water” has in its center a blue, green and orange colored splash of water. “Bright red sun cruelly hot but the wind is of autumn” features a sun within a Japanese style landscape, with three kimono-clothed figures. The co-founder of Synchronism, in which different colors are related to musical notes, imbues most of his "Haiga Portfolio" pieces with his characteristic bright colored segments.