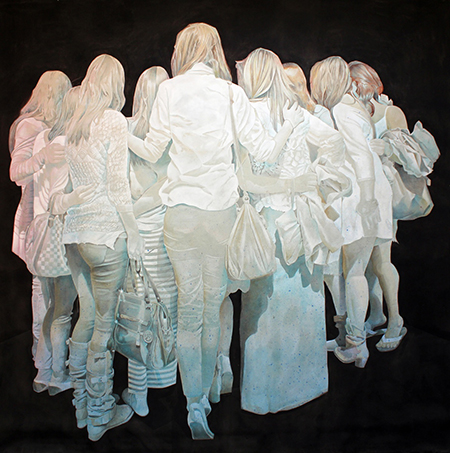 Brooklyn-based Rebecca Bird offers “Women,” large scale, photorealist images that the artist describes as fulfilling her desire to “paint monumental women, unsung, typical people” whom she views as important as celebrated historical leaders. Beautifully detailed and imposing in scale, these women shape a potent message of what it means to be strong, to be female, to be the keeper of the family flame. “I went large because I wanted these women to be intimidating and important,” Bird says, and she succeeds. Also on view are Bird’s beautiful, dream-like cloud paintings, in which the artist uses images of explosions to represent interior states or emotional traumas.

Also on view are Siri Kaur’s evocative “Crow’s Field” photographs of a childhood adventure zone of unclaimed farmland where the artist grew up. The childhood fantasies that played out in this landscape are dazzlingly recreated in photographs that use the titular field as a metaphor. In “Girls,” colorfully clad children stand on tiptoe to play together. A stand of “Snow Trees” looks like children’s miniatures. The photos are evocations of a lost era, one that most vividly exists in the artist’s imagination and made real for her viewers.