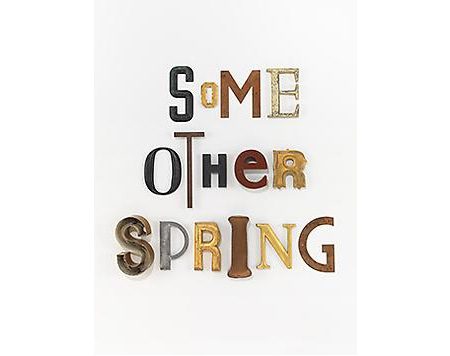 Jack Pierson's current photographic images - printed large and extra large - bring to mind the fold-out posters that were sometimes included with LP records. Folded, unfolded, then pinned to the wall, the images mix blurred and darkened interiors with empty landscapes that evoke the high desert near Pierson's home in Joshua Tree, and the periphery of tourist zones of the Nile Valley. His image of the Las Vegas airport emphasizes the remnants of a razed building where a few remaining palms struggle among the weeds. Other than a lone nude posed near a rocky seascape, Pierson's current oeuvre is devoid of his iconic young men. Perhaps "Some Other Spring" is one that foreshadows a coming autumn, one that is both nostalgic and melancholy - familiar Pierson territory. Outside the gallery hangs the show's most optimistic work, one of the artist's familiar amalgams of letterforms - fully electrified - casting a neon glow on Santa Monica Boulevard (Regen Projects, West Hollywood).