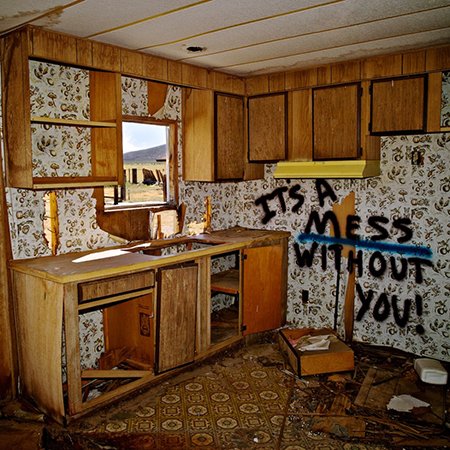 Osceola Refetoff, It’s a Mess Without You,” 2011, archival pigment print

“It’s a Mess Without You: Selected Photographs” is a vivid tribute to desert life. The show features new work from photographer Osceola Refetoff’s “Desert Windows” series. The photographs are taken inside empty and decaying structures in the California desert, and each features a view through a window onto a vivid external landscape. “Much of my work explores the intersection between human enterprise and natural environments. Many of these structures are the former homes of agricultural workers, abandoned when the farms went under,” Refetoff says.
Shot in Cinco, Trona and other desert communities, the 20 pieces here are narrative works that convey a visual style which the artist says was influenced by “the great mis-en-scene directors — Lange, Welles, Kubrick, and Melville. As a photographer, I’m interested in carefully framing compositions in depth.” Witness “Window with Wire & Tiny Cloud — Cinco, CA — 2009" in which a brilliant blue sky waits triumphant and timeless outside the wooden frame of a window, marred only by the small imperfections of a wire caught on the decaying house and a patch of cloud. We are looking at the landscape of eternity and the brevity of human existence in one brightly colored image. In “Trailer Bathroom with Floral Motif & Mountain View — Coso, CA — 2015,” the majesty of a raw blue mountain peak is visible through a narrow window, an escape hatch from the detritus of a broken bathroom and the remains of its garish design. Refetoff's photos are a haunting study in contrasts, the imperviousness and wonder of nature meeting the all too short timeline of man.
Porch Gallery
LISTINGS