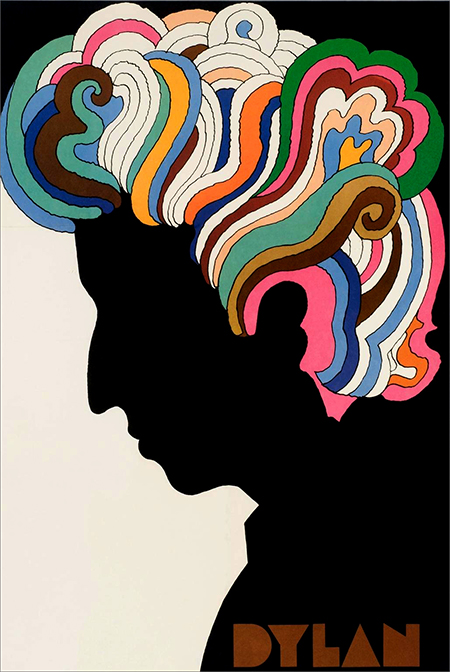 “Pop Art Design” features retro furnishings and accouterments, including sofas (Studio 65’s “Leonardo” [1969], a curved sofa with a stars and stripes theme), chairs (Charles and Ray Eames “RKR-2” rocking chair [1951-52]), lamps and even a 1958 green “TV receiver,” designed by Herbert Hirche and made by Braun in Germany. The exhibition also displays paintings, photographs, videos, book and comic book covers, as well as posters, including Milton Glaser’s familiar “Dylan” (1966), featuring the musician with a psychedelic style hairdo. Along with 80 pieces from international museums, the show exhibits dozens of objects that were made in this country, including several pieces from the museum’s permanent collection. These include Ed Ruscha’s painting “Annie” (1965), Andy Warhol’s serigraph “Mao” (1972), Vija Celmins’ “Eraser” (1967), a 6 5/8 x 20 x 3 1/8 inch model of an eraser that schoolchildren use, and DeWain Valentine’s “Pink Top” (1965) sculpture of polyester resin and fiberglass. Beyond the style and spirit of the 1950s to 60s, this exhibition evokes deeper philosophical aspects of the pop art movement, including its fascination with celebrity, fetishism, the media, the merging of design with art, and of low art with high art.
While pop art began in the UK and was soon after adopted in the United States, this show was generated in other parts of Europe and organized by the Vitra Design Museum in Germany, in collaboration with the Louisiana Museum of Modern Art in Denmark and with the Moderna Museet in Sweden. In fact, this groundbreaking art movement became nearly as popular on the other side of the Atlantic Ocean as it was here. The show is organized into 18 sections, including “From Folk Art to Pop,” “Dissolution of Images,” “The Female Fetish” and “The Art of Graphics.”
Orange County Museum of Art | OCMA
LISTINGS