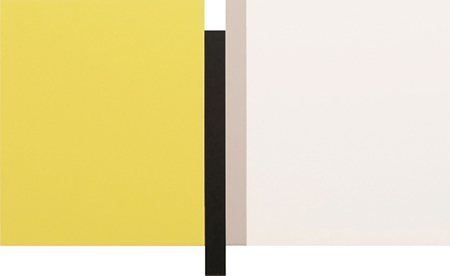 Scott Heywood conducts a visual symphony of twenty clean-cut, hard-edge, variously shaped wall works. These carefully executed pieces, all with harmonious, even meditative compositions, reference Piet Mondrian. Each is constructed from two or three monochrome panels of wood, canvas and assiduously applied acrylic paint. All are characterized by brightly colored geometric forms. Yet these hybrid paintings/sculptural artworks are personal and distinctive. The title of the show, “SHIFT | STACK | SUNYATA,” describes the three basic configurations of the artworks (sunyata being a Buddhist term for “void”), with the sizes ranging from 24 x 24” to 54 x 88 1/2”. Each of the six “Shift” constructions is composed from two square or rectangular painted and interlocked panels. “Red on Red,” “Yellow, Black” and “Grey, Blue” are fascinating crosshatched works, with balanced architectural aspects. The twelve “Stack” pieces are each composed of three rectangles stacked on top of each other, with narrow black panels separating them. The most intriguing is the “Sunyata” group. These two seemingly simple compositions, each constructed of two nearly square colored panels, side by side, possess a carefully balanced dynamism.