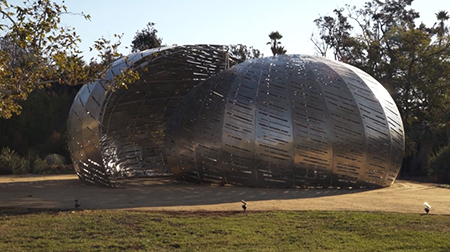 Putting into service a pairing proven successful during the Renaissance, science interacts with art in this collaboration with nearby NASA’S Jet Propulsion Laboratory. The result is the shell-shaped, larger than college dorm sized, laser-cut aluminum "Orbit Pavilion," an upshot of visual strategists Dan Goods and David Delgado in collaboration with composer Shane Myrbeck and architect Jason Klimoski of Studio KCA. As the first in a five-year series of projects designed to attract a range of contemporary artists to respond to themes drawn from some aspect of its collections, "Orbit Pavilion" has ties to the library’s aerospace history holdings, as well as its manuscripts and rare books about astronomy and aerospace.

The present work is an innovative “sound space,” representing the movement of the International Space Station and 19 Earth Science satellites. Visitors are coaxed to hear sounds emitted by satellites passing, beyond sight, in the skies above them. Inside the intentionally shell-shaped structure, distinctive sounds flood the space. As each satellite passes overhead, their individual voice is bestowed on it by composer Myrbeck. There is the sound of a human voice, the crashing of a wave, or croaking of a frog. All are amplified on a system of 28 speakers. Each sound interprets one of the satellites’ missions, joining with the others to create a symphony from outer space.