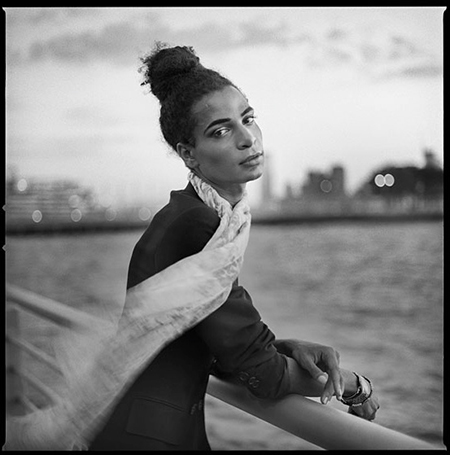 Was there ever a more important time to conjure the 1980s photographers and their focus on marginalized groups, and to admit that “identity politics” may be ready for a recrudescence? Mark Seliger’s “Christopher Street” is a beautiful set of black and white photographs of transgender men and women on that historic haven for the nonconformist, the radical, the transgressor of social norms. The images make an evocative statement on both the fungibility of sexuality and gender, as well as the essential humanity of all individuals. That is not to say the subjects of these portraits are here just for our visual consumption, or to be patient, long-suffering ambassadors for their communities. Their expressions vary from skeptical weariness (“Tay Tay”, 2014), to dreaminess (“Mahayla McElroy,” 2015), to insouciant confidence (“Vickyana Torres,” 2016), thus complicating the relationship between viewer and subject. And while there is joy in capturing people as they truly are, there is also a sense of melancholy infusing the works. Greenwich Village’s rapid gentrification and the country’s overall political shift to the right are leading to the vanishing of these enclaves of unfettered, unapologetic exhibitions of identity. Thus, if Seliger’s timely work is certainly aesthetically and emotionally moving, it will also alert viewers dismayed by creeping homogeneity.