“With Liberty and Justice for Some”
Recommendation by Simone Kussatz 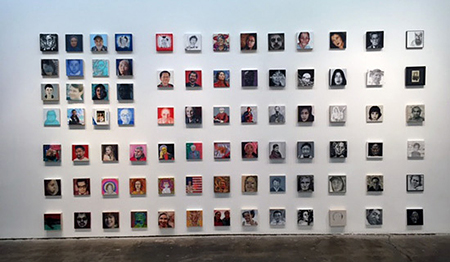 “With Liberty and Justice for Some,” a mega-group show co-curated by artist Monica Lundy and gallery owner Walter Maciel, is a response to the feared and certain upcoming changes under the new President. It consists of about one hundred 8 x 8 inch portraits of immigrants, including prominent individuals such as former Secretary of State Madeleine Albright, Albert Einstein, Melania and Frederick Trump, William Penn, and others. It draws attention to the new President’s planned immigration policy, which on the surface only affects illegal and criminal immigrants, but may well have unforeseen consequences for many other immigrants and American citizens. Of course, America has been a land of immigrants from its earliest history, when St. Augustine was founded by the Spanish settlers in 1565, to the English separatists who came here on the Mayflower, to the European and Asian immigrants who arrived during the Gold Rush, to the waves of immigrants who came through Ellis Island prior to the first World War, up to the immigrants arriving from various regions of the world in the present day.

Even though this show doesn’t go deep into immigration history, it succeeds by getting rid of labeling and effectively humanizing immigrants. For who is the immigrant? First, he or she is a human being. Second, they could be persons Americans have now or once had relationships with, whether it is the British and deceased friend of American artist Susan Feldman Tucker, the Italian mother of American artist Virginia Katz, or the German artist Nike Schroeder on her path to receiving dual citizenship. This message is fortified through an installment made up of selected immigrant portraits that take the shape of the American flag. Hence, it says clearly and empathically, "united we stand up for immigrants".