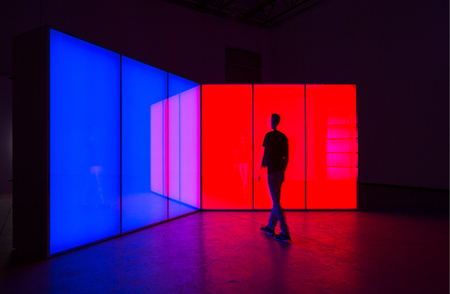 Phillip K. Smith III’s light sculptures, “Bent Parallel” and “Torus 9,” are inspired by Light and Space predecessors such as James Turrell and Doug Wheeler. By exploring light, color, reflection, constant change and elements of chance, Smith’s three-dimensional installations entice us to spend time with them. “Torus 9” is a 46-inch in diameter, 8-inch deep circular sculpture that is lit by multi-colored LED lights in reds, blues and yellows. The mechanics of this piece allow the lighted colors to constantly change and morph into each other, creating a scenario that evokes the effects of a sunset. By employing inventive programming, rather than a visual loop, “the piece has its own life,” the artist says. The changing color patterns are never same.

“Bent Parallel,” of glass, aluminum, LED lighting and custom electronics, consists of two 96-inch high panels, attached at a 120-degree angle. When you stand at the center of the piece, where the two panels are joined, all that is visible are the two panels. But when standing on either side, the illusion of a third reflective panel becomes visible. Each of these panels has one solid color, which is constantly shifting from one primary color to the next. The third imaginary panel reflects the currently visible colors of the two real ones, while the side that the viewer is on reflects more of the colors of that particular panel. These two seemingly ephemeral sculptures are both mysterious and pleasing.