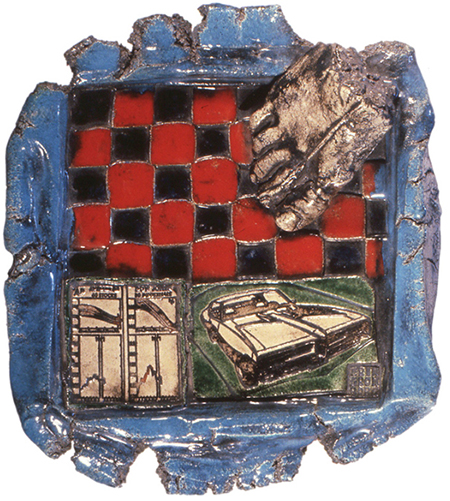 The career of Erik Gronborg is highlighted in a survey show that follows the artist from his student years at UC Berkeley. The artist’s ceramic sculptures seem slightly out of place at an institution that focuses on folk art, craft and design, but Gronborg’s wide range of production includes furniture making, photography, drawing, printmaking and what could be considered environmental design. Collectively this body of work aligns with the museum’s folk art orientation, while it is also a nice contrast to the permanent collection. While the exhibit space is small, it did not limit guest curator Dave Hampton from packing a good deal of the artist’s career into the open installation. The shifts in Gronborg’s making are highlighted by many of the cities he called home, starting with his native Denmark and including stints in Oakland, Portland and Las Vegas before relocating to San Diego in 1976. One ordinarily expects earth tones and vessels from ceramists, but it’s surprising to see sports cars and pop imagery juxtaposed with the functional medium. The most successful element of the show is an attempt to recreate his living spaces. Habitation turns out to be an essential aspect of understanding Gronborg’s large body of work. His furniture placed alongside artworks and some of his favorite objects illustrate what he valued as an artist.