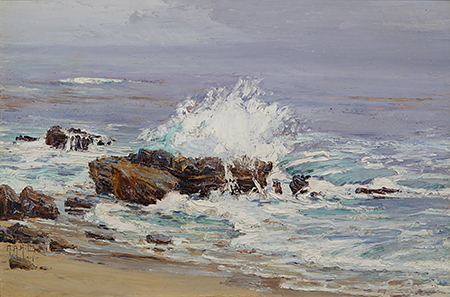 Revisiting the work of impressionists is a periodic event at this regional museum; yet this is its first major retrospective of early 20th century artist Anna Hills. The lush, colorful “Miss Hills of Laguna Beach” features more than 60 of her paintings, some of them rarely exhibited publicly, along with documentary material about her background, well-traveled life and community activism. This diminutive woman’s landscapes and seascapes, primarily of Southern California and the Southwest, as well as portraits, employ broad-brush strokes and pure, bright colors that were loosely influenced by French Impressionism. The never-married, financially independent Hills (1882-1930) painted thickly and aggressively, creating a bold body of work. The paintings in this show include: “High Tide, Laguna Beach” (1914), a seascape with rocks and crashing waves (which won a bronze medal); “Frances at Little Lake” (1920), a portrait of a young woman, sewing and seated on the ground among autumn foliage; and “San Gorgonio from Beaumont” (1927), with its long vista of purple and snow-capped mountains.

Equally intriguing are the many photos of Hills, of her gracious home in north Laguna Beach where she entertained, the surrounding community and its art loving citizens. There are also detailed explanations of her community engagement, particularly regarding her influence on the Laguna Beach Art Association’s (LBAA) formation in 1918, today the Laguna Art Museum (LAM). She was a founding member of LBAA, its president for six years, and a major fundraiser to build its permanent gallery on Cliff Drive in 1929 — where LAM stands today. Not mentioned in the didactics is the museum’s upcoming centennial in 2018. Hills will be prominently featured in the museum-wide exhibitions then.