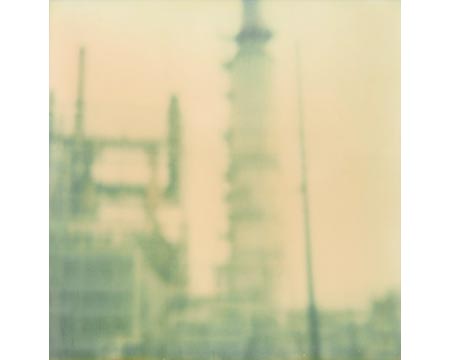 Two alluring, calming bodies of work include Susan Mikula's hazy, muted industrial landscapes featuring the Port at Long Beach, California, and the coast between New Orleans, Louisiana, and Galveston, Texas; and Ward Schumaker's ethereal abstract painting in gentle tones that beckon one to relax and enjoy.

Mikula uses a vintage Polaroid SX-70 and outdated film for her works; she then scans and enlarges her pictures, but never alters the degraded images the film has captured. Forms of greenish-black blur into a yellow-orange background to a point that hovers on abstraction. This softness gives the images a painterly touch. Evident as well, because of the breakdown of the film, are pockmarks on the surface of the images; in some cases it's so evident as to lend an added depth to the piece.

Showing both larger- and smaller-scale work, Schumacher shows a mastery of form and composition in his mixed-media paintings featuring drips, gestural brushwork, words that are often smudged, and strange figures. The works feature a palette of grays, yellows, pinks, baby blues, and often stained off-white or beige backgrounds. Fluid drip lines amble and loop, letters appear applied using a template, paint is brushed on in thin layers, stylistically resembling a Cy Twomby-esque scrawl. These are dreams, complete with odd bits, that you relish staying with for just a few more minutes. Relatively new to the fine art world, Schmacher is an established illustrator, having been featured in the 'Los Angeles Times,' 'New York Times,' and the 'New Yorker,' among other publications. It's easy to get lost in this work, simply because you want to.